GROUP A, Studio Makkink & Bey and Roukens + Van Gils share the credit for the interior design of the new municipal offices in De Rotterdam, designed by OMA. The Municipality of Rotterdam commissioned the interior and began moving into the new offices in phases from August 2014 to the end of the year. The offices occupy 33 floors in the middle of the three towers.

The design features an interior that reflects a ‘vertical city’, which connects ‘urban junctions’ for collective use, meeting spaces and interaction. As part of the integrated design, GROUP A and Studio Makkink & Bey were able to formulate their vision in an urban planning concept. The welcome area on the 22nd floor and the restaurant on the 21st floor form the ‘city centre’ of the vertical city. The generic parts of the work environment, such as normal work spaces, meeting areas and concentration rooms, form the ‘neighbourhoods’. The more specific functions of the work environment, such as the conference rooms, lounge areas, meeting areas for specific purposes, quiet zones and service facilities, form the ‘city squares’ and ‘parks’. The design offices each applied their own design efforts to elaborate the various sections of the space. The two design approaches create a layered effect and give the design a dynamic feel.

The ‘city centre’, welcome area, is located in the middle of the building. The city centre is composed of the double-height 22nd floor and the 21st floor, where visitors can transfer from the low-rise to the high-rise lifts. The 22nd floor has a public function for employees and visitors. The space was designed to resemble a ‘living room’, where you receive guests with coffee from the Italian Coffee Bar. Here, people can organise informal meetings, give small workshops, or have breakfast, lunch or coffee during the afternoon. The only structural change to the building was an inviting open stairway from the reception area on the 22nd floor to the restaurant on the 21st floor. The restaurant has various zones, each with its own atmosphere based on the view and the function of the space. 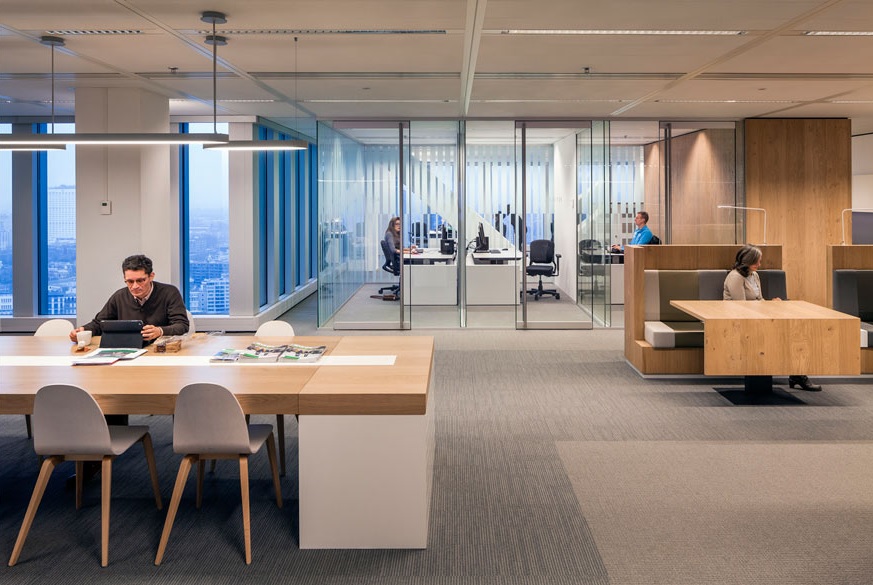