A dilapidated national monument with an impressive industrial past. After earlier planning, the initiative was taken again in 2018 to give these unique halls a new mix of functions. GROUP A has made a design that uses the historic character of the building as its starting point.

The 5 imposing Van Gendthallen were built, rebuilt and extended in phases in the period 1898 – 1910, based on different construction methods and different aspect ratios. It is precisely these differences between the halls that make the ensemble so exciting. The halls (12,000 sqm), built in traditional brickwork in neo-Renaissance style, served as production halls for Werkspoor NV. The challenge for GROUP A is to preserve the existing industrial character and to give the halls a new powerful identity by transforming the monument as cleverly as possible.

In our design, we want to activate the Van Gendthallen and give it a new meaning by adding a rich mix of functions and thus connecting it to the various spheres of influence of the city. We see this assignment not only as an interior design task, but also as an urban planner: what can the Van Gendthallen mean for the city and vice versa?

With the two intersecting ‘inner streets’ along and right through the halls we make the Van Gendthallen ‘fordable’ and double the number of ‘facades’ and running metres of active plinth. Situated in the middle of the halls and with a transparent roof, Hall III is the most obvious hall for a new public ‘inside out’ street, which brings the liveliness inside.

Furthermore, the old buildings can be made more sustainable with smart solutions for materialization and energy use. Business spaces have been added according to the box in box principle. In this way we minimize the cubic meters of air-conditioned space and maximize the experience of the industrial architecture and elements. The design includes office space, business space, housing and short stay, but also public functions such as catering, museums and retail. Each hall has its own program and thus also gets its own character.

The desire for an inner harbour and helicopter platform led to the addition of a scaffolding, resembling an apron, which can cover the inner harbour and at the same time serve as a growth platform for extra programme. We called this structure the 6th hall. With this transformation and expansion, the ‘cathedral of the modern age’ is again ready for the future. 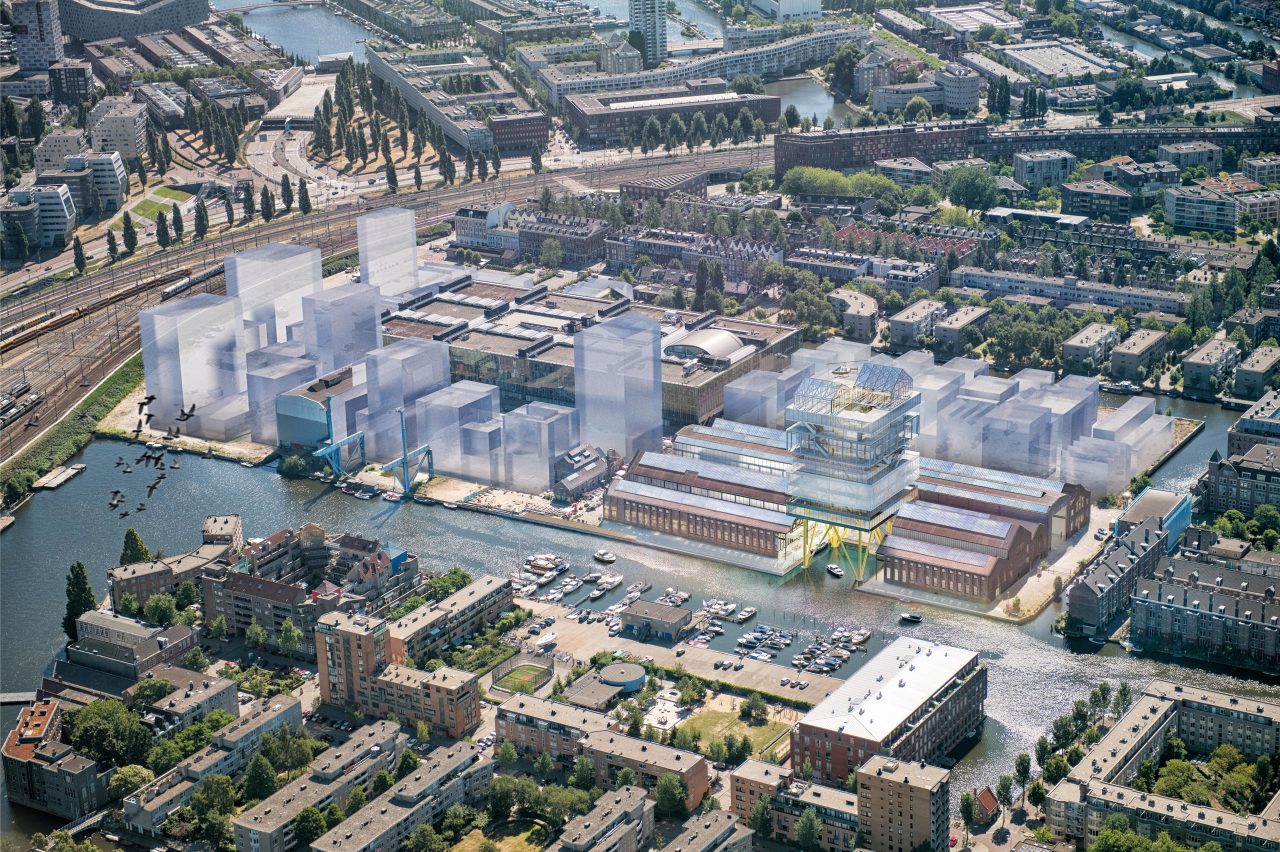 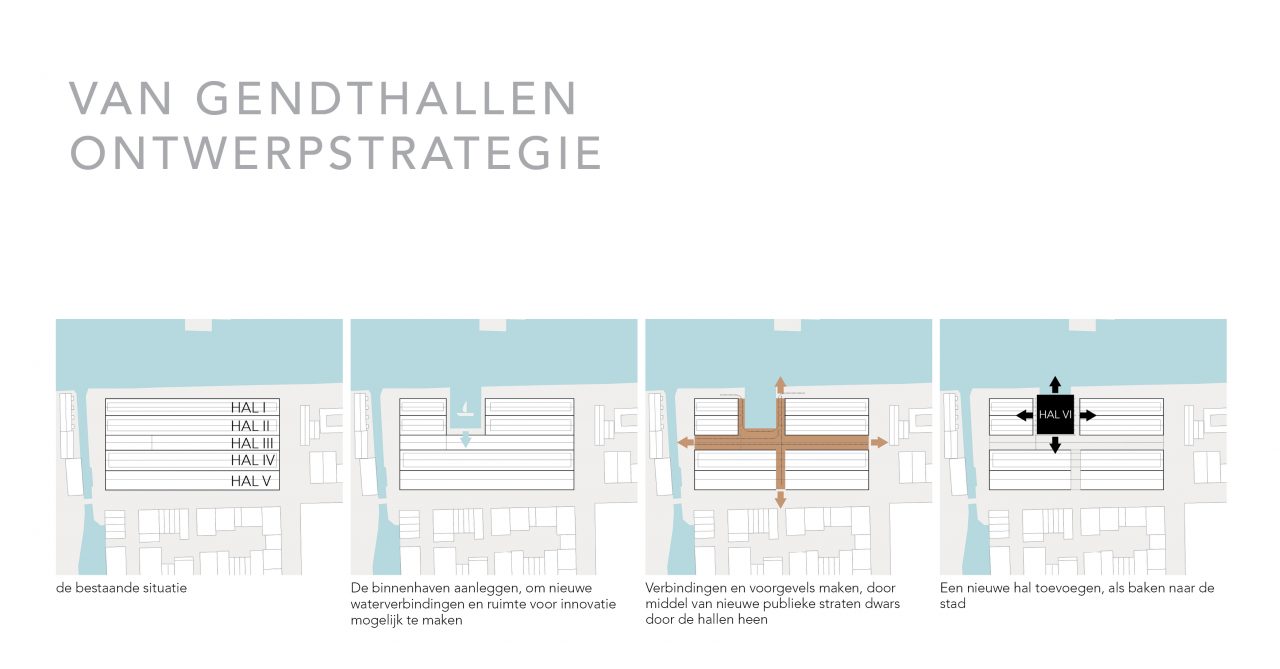 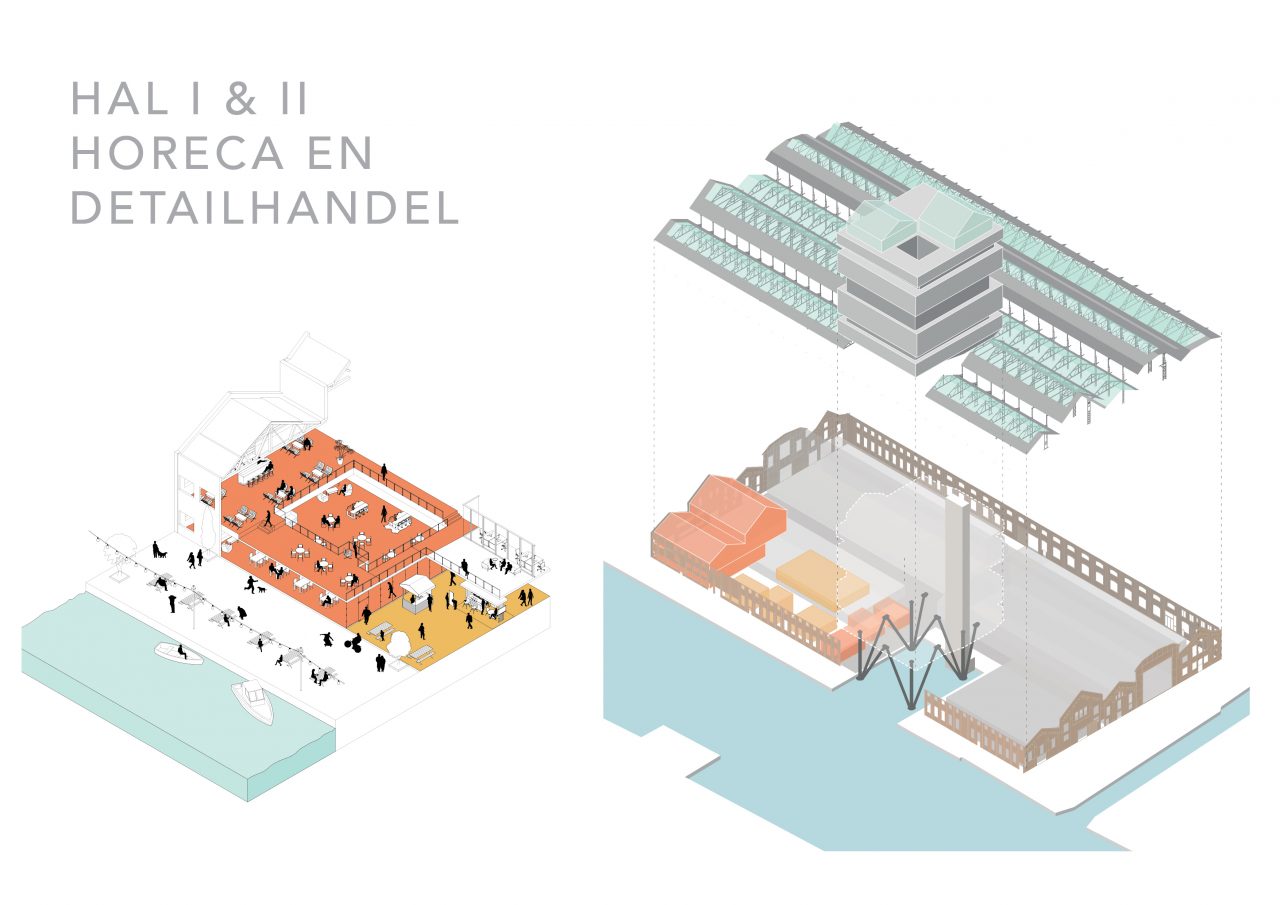 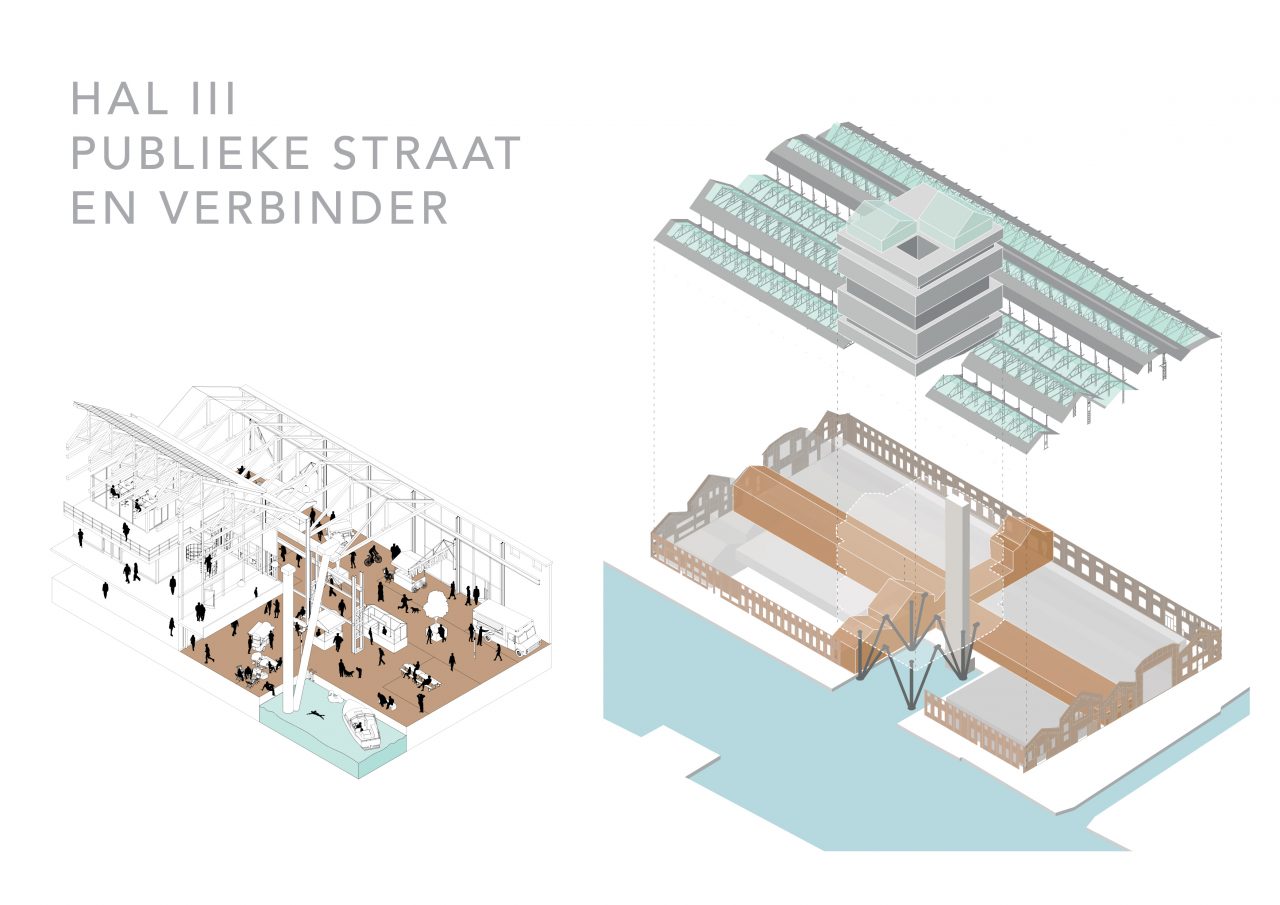 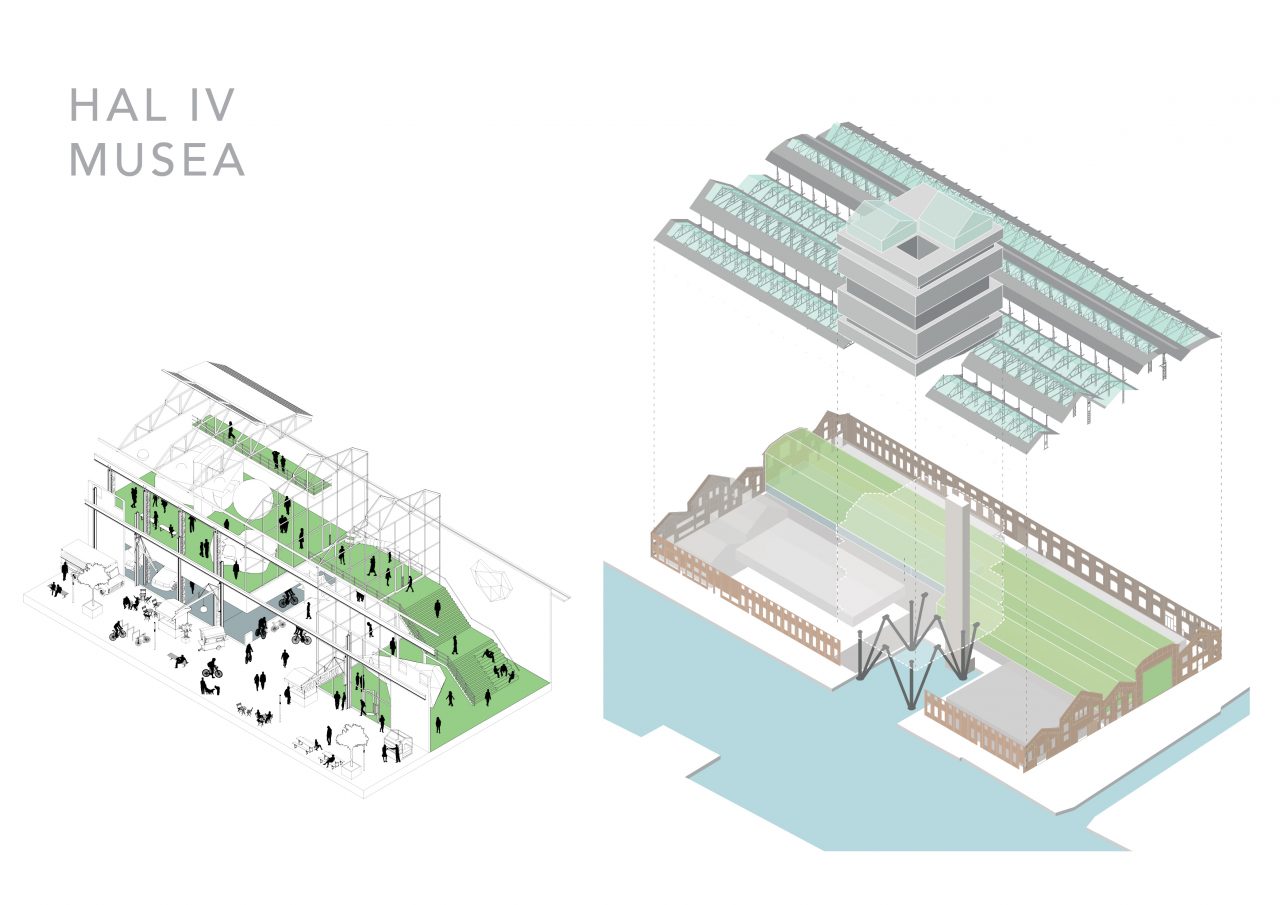 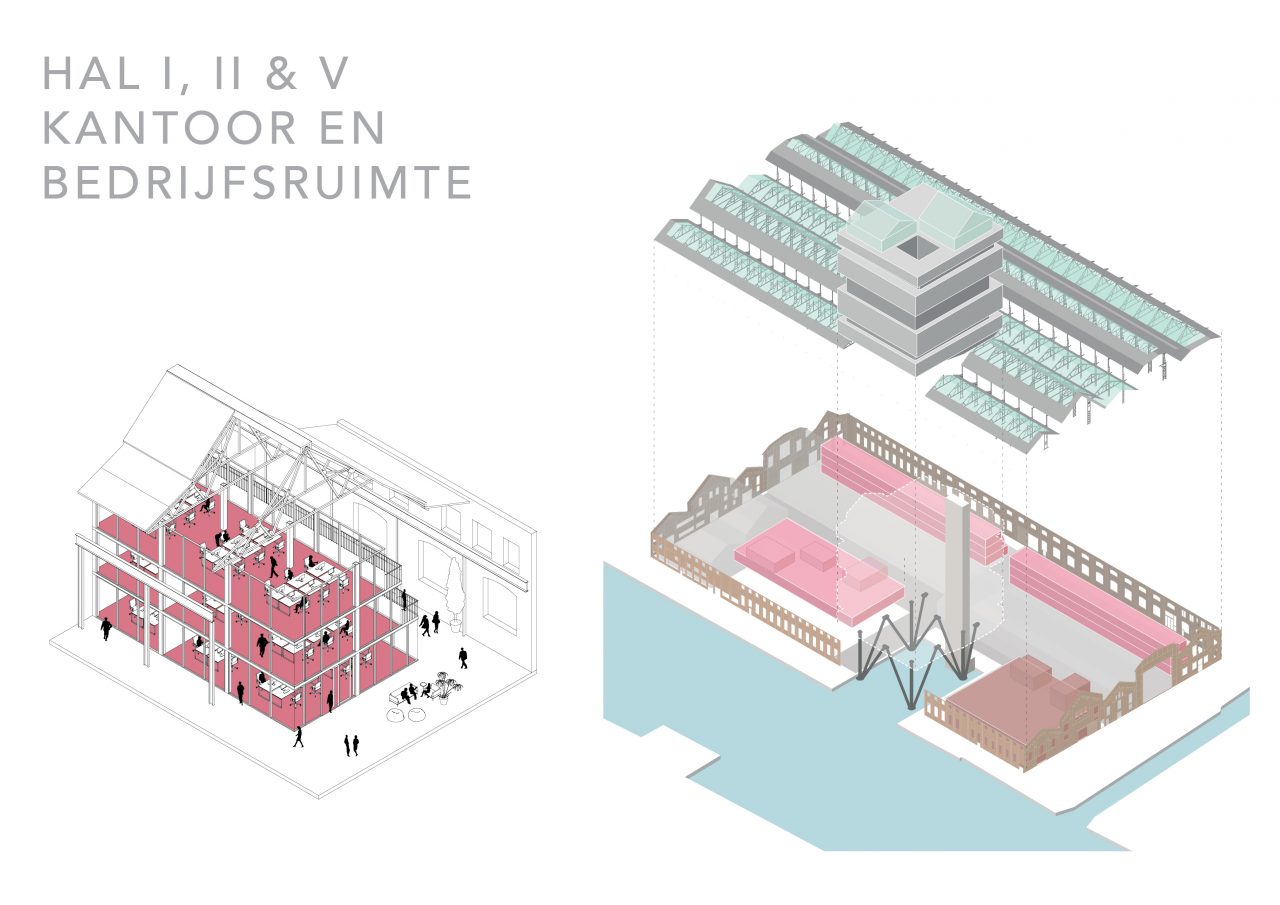 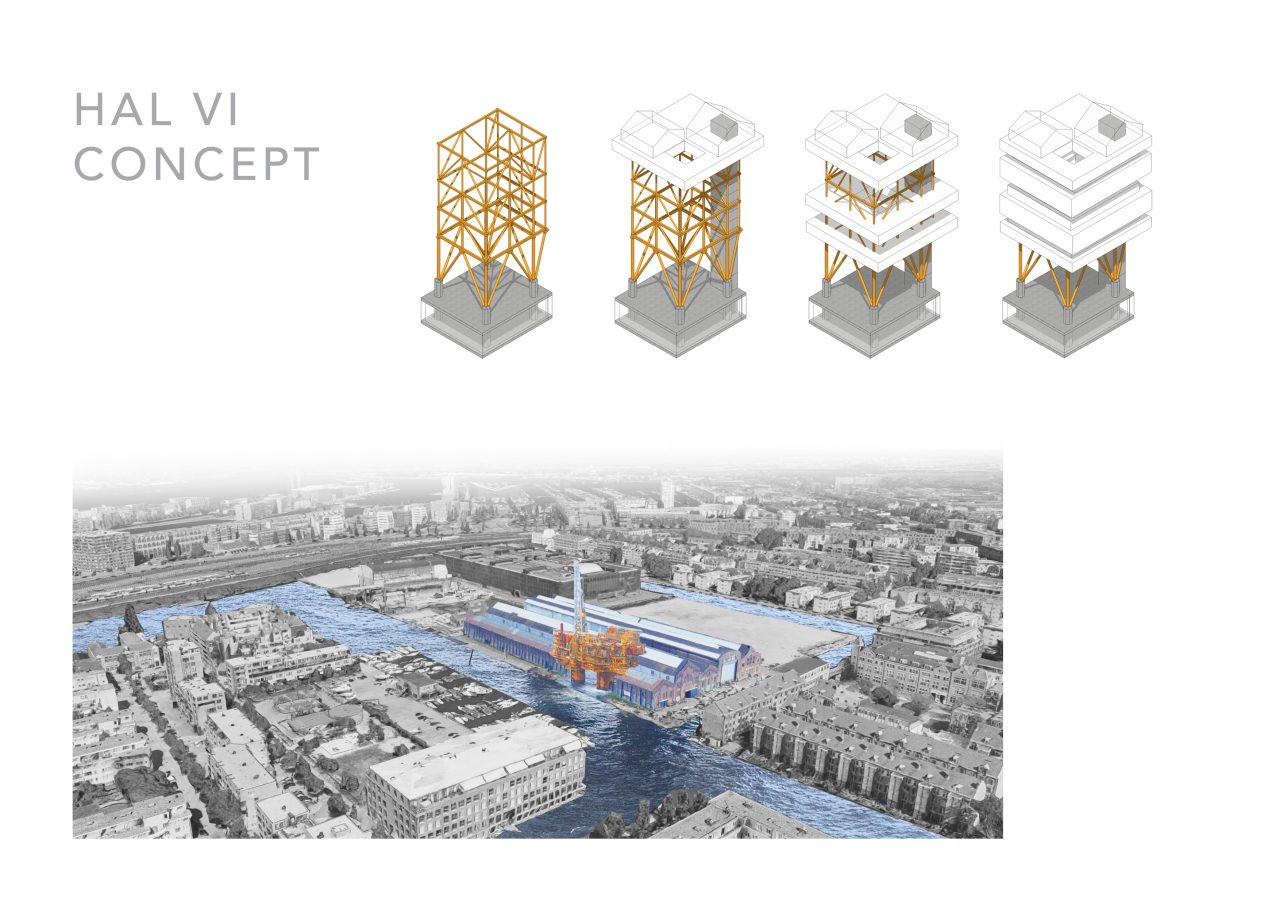 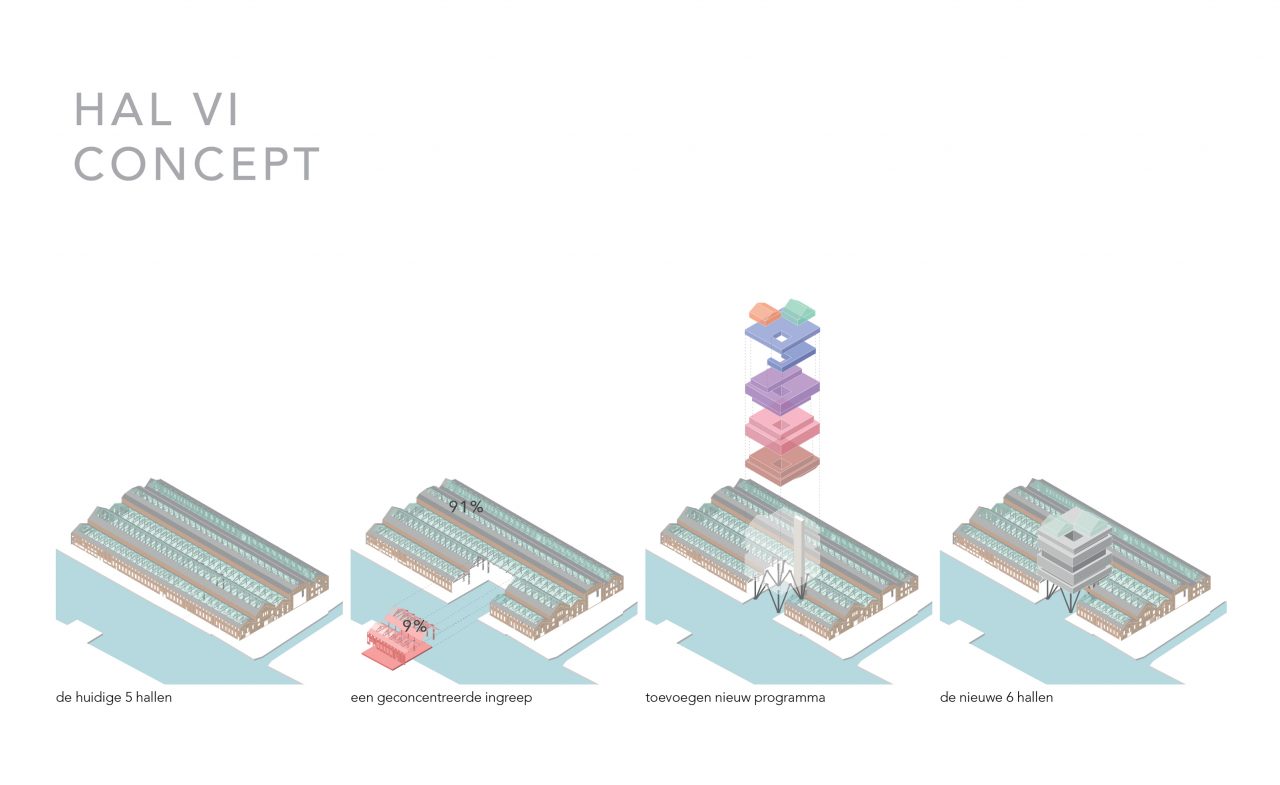 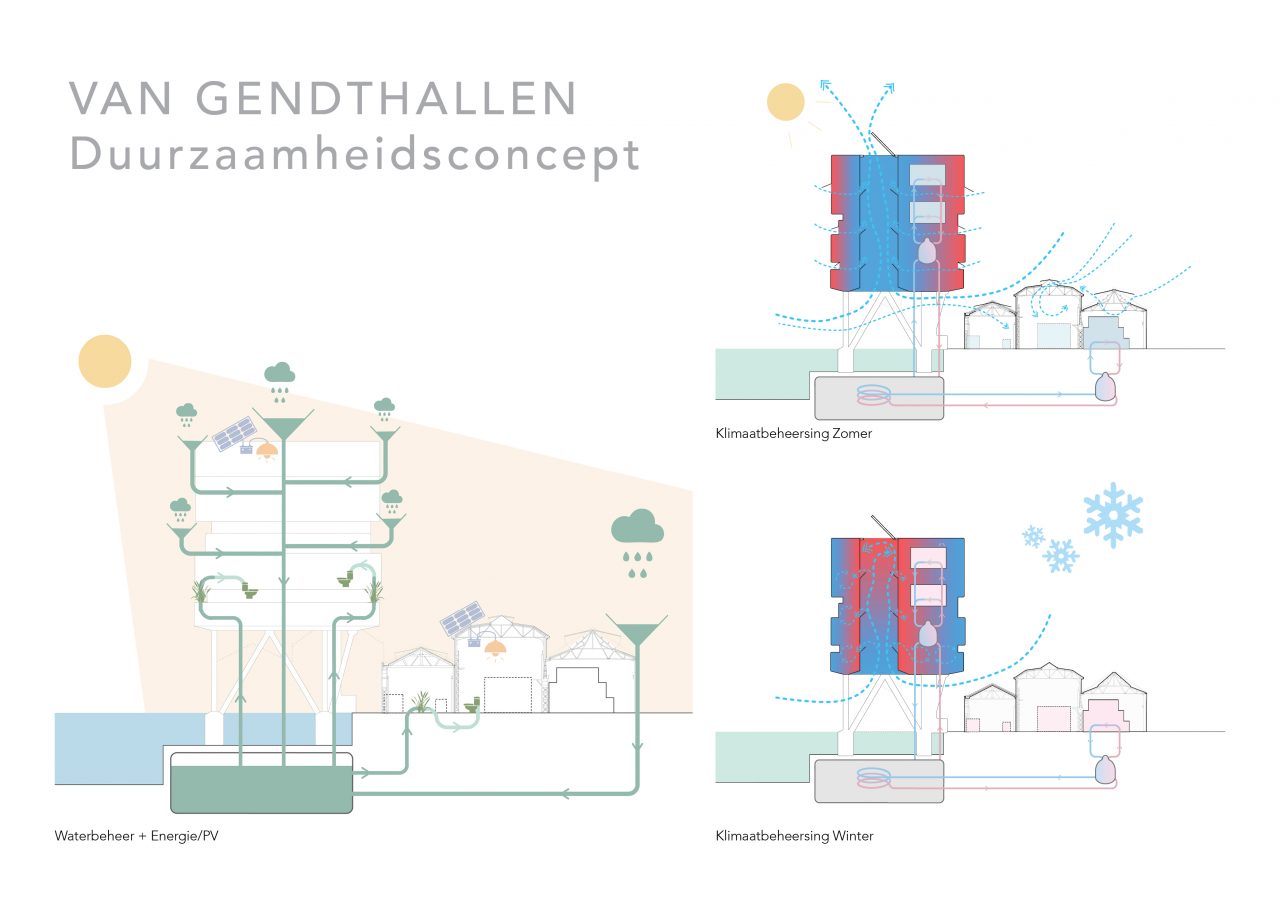 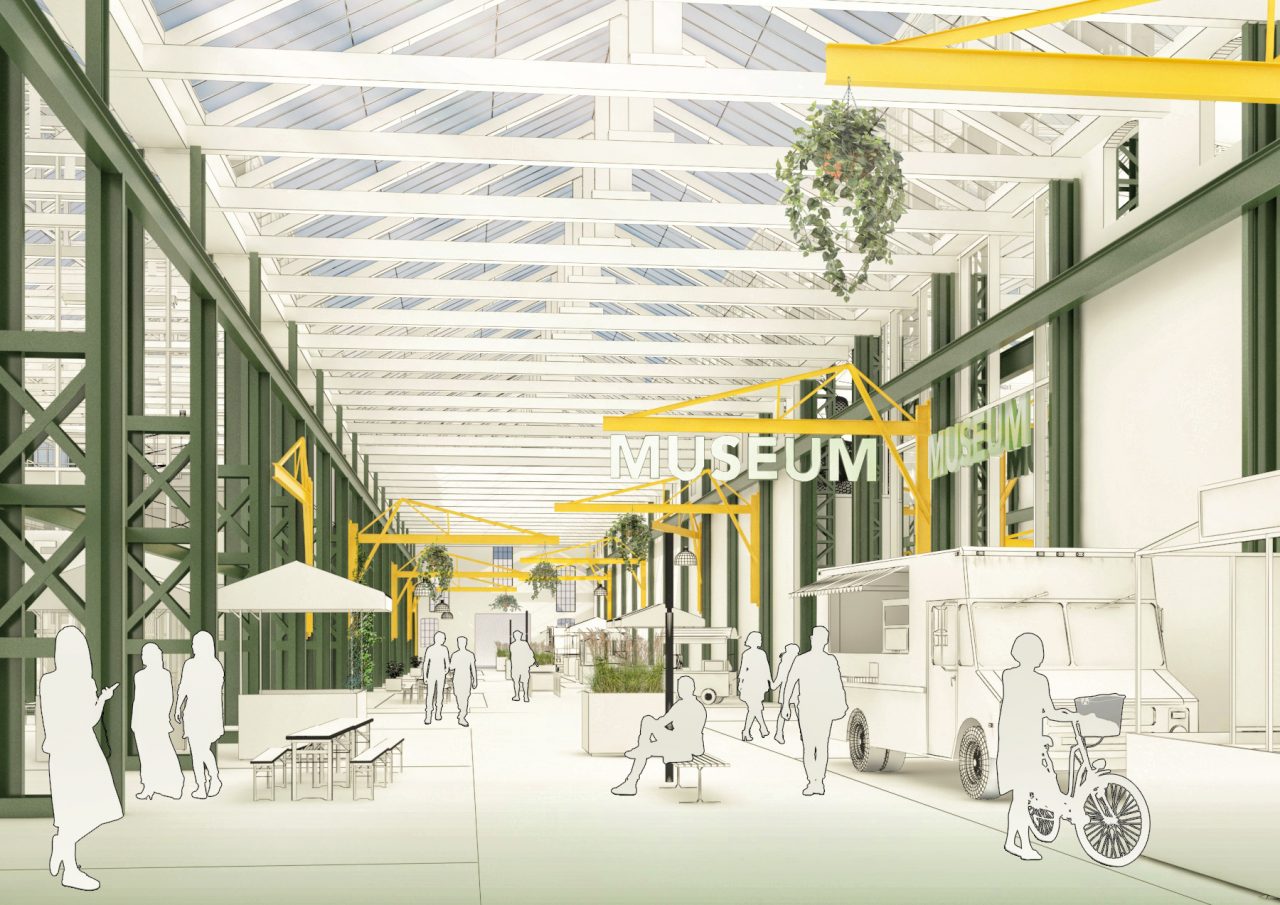 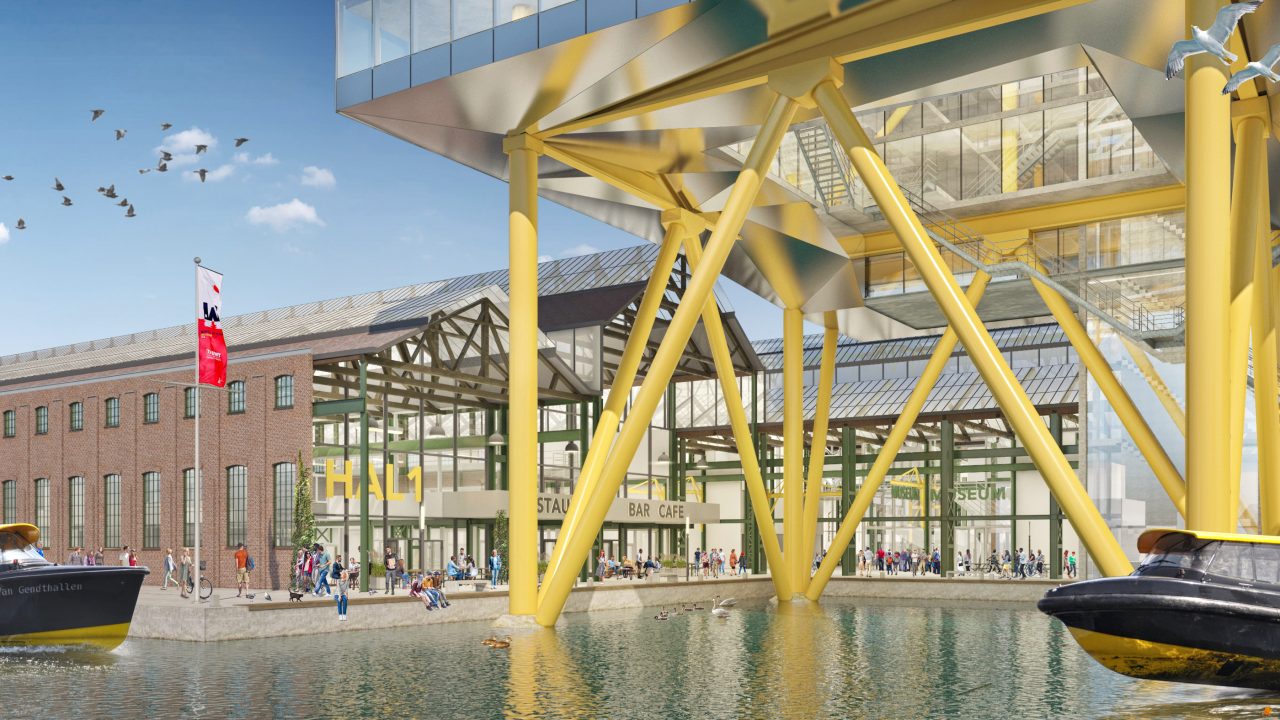 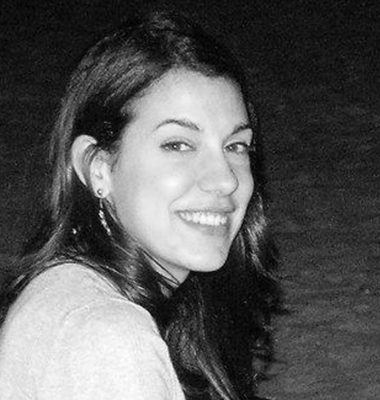